Christmas is a big deal for us at Dan-D Foods Vancouver, Canada. Every year, it is a time where we celebrate with 200 friends and family. However, at Dan On Foods Vietnam, it is Chinese New Year that calls for   the biggest celebration of the year. Housing almost 600 employees, it’s a massive event held at the Vietnam factories. 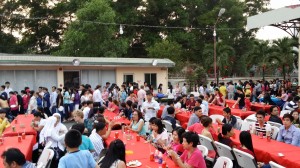 Towards the year end of the Lunar calendar, it’s also a time Mr. Dan On regards as payback time to the community. This year, we sent two Dan-D Foods ambassadors from Canada to participate in several local charity functions, held in the province where we first established our business in Vietnam in 1999. 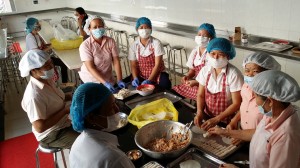 This province, Binh Duong, means flat land and sunshine. It is recognized as a land of opportunity by our ancestors, where our great grandfather established our first enterprise during the early 19th century. According to our grandfather, our family once dominated sugar cane manufacturing and clay pottery in this area. Subsequently, we came back and found our roots; we diversified into the cashew business.

Our two ambassadors, Mr. Dan’s mother, Lulu, and his Canadian adopted mother, Irene K, met and visited several schools within the province. They were greeted by 400 deaf and mute children, who were just as excited to meet them as they were to meet the children. Our ambassadors handed out lucky envelopes to 200 local school children, and also a group of 200 minorities that come from several different tribes within Vietnam. This group of minorities are supported by the Catholic Church in Vietnam where nuns dedicate their energy in teaching them Vietnamese and ways of adapting into civilized societies. 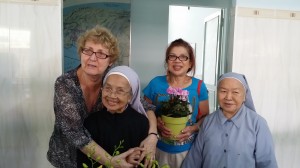 It was mixed with laughter and tears during these gatherings. Particularly, during the meet with 150 blind people on January 24th, it became very emotional for our ambassadors and for everyone. It really makes us feel blessed for what we have and also reflect on what we can do to help those who are less fortunate. 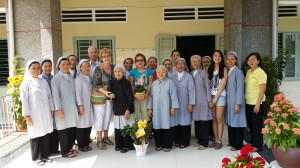 At Dan On Foods Vietnam, we work very hard to put together a successful business, but simultaneously, we also give thanks to our employees for their exceptional attitude and unwavering dedication. We want to share our success with them and also to those in need of help. Dan-D Foods has set up sponsorships since 1992, and as time continues on, our mission remains resolute.

We want to thank Mr. and Mrs. Tzu from KLH Printing in Taiwan for their generosity in donating $3000. We could not do all this by ourselves without the help of our business associates. As our New Year celebration nears, every department at Dan On Foods  have been busy at work, yet our staffs still spend extra energies into organizing the event and doing rehearsals for the upcoming performance program. The kitchen is especially festive, where head chef and sous chef have been working on the New Year’s menu. We can see the bustling traffic throughout the kitchen. We see the happy faces and feel the excitement in the air at the factory.

As part of company tradition, everyone can expect big, lucky red envelopes, money bonuses, lucky draws, money tree, and free trips! We hope everyone has a safe holiday as we welcome the year of the horse!