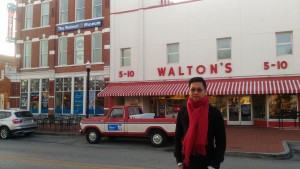 We have a surprised Christmas gift from our CEO Dan On to visit Bentonville, headquarter and birth place of the world largest retail chain Wal-Mart and it’s definitely an eye-opening trip where my co-worker Bell and I can learn so much about Sam Walton and his legacy. We flew across five States from Fresno, home of Dan D Pak USA to Arkansas and headed down to Wal-Mart Museum which is also Sam’s first variety store named Walton’s 5-10 at the town square. The store is preserved with a vintage look as it first opened in 1950 with beautiful merchandises of candies, snacks and souvenirs through big glass window.

After navigating our way through lines of colorful and tempting treats, we spent 30 minutes walking and contemplating about the story of Wal-Mart, starting as a humble variety grocery store in remote Mid-South, and by 2004, Wal-Mart has expanded to 5,305 stores, including 551 Sam’s Club and 1,603 international stores with annual sales of $285 billion. This colossal retail Mogul is hand nurtured by Sam Walton, a frugal, determined and passionate entrepreneur who has summarized his success of building and operating Wal-Mart Empire into 10 simple rules for young entrepreneur folks like us.

Rule 1 – “Commit to your business. Believe in it more than anyone else”. Sam Walton says he does not choose to be a common man, if he can, he seeks opportunity, not security. Wal-Mart is built on Sam’s believe that a discount store will thrive in a small town below 3,000 people but no one would believe him in 1960 and he definitely proved that those were wrong. Later, Wall Street analysts speculate that Sam won’t be able to manage Wal-Mart when sales reached $1 billion, then $10 billion and later $30 billion because the company is too big but he proved those who didn’t invest in his stock made huge mistake.

Rule 2- “Share your profits with all your associates, and treat them as partners. In turn, they will treat you as a partner, and together you will all perform beyond your wildest expectations”. Sam insists on preferring his employee as “associate” because it establishes a partnership between each personnel and his company. In fact, Wal-Mart is the only retail business that doesn’t need a Union to speak for its employees. Sam began his profit sharing plan in 1971 for employees and he contributed a percentage of every eligible associate’s to his or her plan which associate can take when they leave either in Wal-Mart stock or cash. Many associates are better off buying their first cars and owning homes thanks to this initiative.

Rule 3- “Motivate your partners. Money and ownership alone aren’t enough. Constantly, day by day, think of new and more interesting ways to motivate and challenge your partners”- Sam is notorious for being unpredictable in placing his employee off the balance in a good way. As Wal-Mart grows bigger, Sam and his top management team constantly come up with plan to keep his employees stay motivated. One of his favorite programs is Eat What You Cook in which every buyer has to visit a different store and act as manager for a couple of days in the department he or she buys merchandise for. The result is indeed very effective, Sam remarked after they’ve eaten what they cooked enough times, these buyers won’t make mistake like load up too many Moon Pies to send to Wisconsin, or beach towels for Hiawatha, Kansas.

Rule 4- “Communicate everything you possibly can to your partners. The more they know, the more they’ll understand. The more they understand, the more they’ll care” – Sam has established an opening door policy, allowing the associates at all levels to see him directly and the “sundown rule” which requires managers answer to customer, employee and vendor questions in the same day. These rules facilitate a strong communication within his organization. One of his important decisions is showing his store managers every single number relating to his store, and eventually to department heads so that they can understand how much profit they make and what they need to improve to compete with other stores.

Rule 5-“Appreciate everything your associates do for your business. A paycheck and a stock option will buy one kind of loyalty. But all of us like to be told how much somebody appreciates what we do for them” – One of Wal-Mart’s success is generating innovation and new ideas to improve business by his huge army of hourly associates and Sam knows that clearly when his team starts a program called “ Yes, Sam we can”. He would fly his hourly associate with best idea whether in merchandising or distributing to Bentonville to weekly Saturday meeting to introduce him or her with the board and other store managers for big round of applauds and bonus.

Rule 6-“Celebrate your success. Find some humor in your failures. Don’t take yourself so seriously”. Sam creates a unique culture at Wal-Mart where people would bet on the most unthinkable act to motivate each other. Sam would do hula dance on Wall Street in grass skirt and lei when he lost his bet Wal-Mart breaking record 8 percent pre-tax profit, but it was nothing close to one of his warehouse manager wrestling a bear when he lost a bet to his crew that they couldn’t beat a production record.

Rule 7- “Listen to everyone in your company. And figure out ways to get them talking, the folks on the front lines- the ones who actually talk to the customer-are the only ones who really know what’s going on out there” Sam is known as a front line charging CEO who would show up often in the drivers’ break room at 4 A.M with box of doughnuts and sit there for a couple of hours to talk to those drivers. He would ask questions such as “Have you been to the store lately?”, “How do people act there?”, “Is it getting better ?” because he knows very well that no one can see more stores than those drivers and they tell him what they think without any prejudice.

Rule 8- “Exceed your customer’s expectations. If you do, they’ll come back over and over”- Sam sets Wal-Mart’s cornerstone of putting customers number one by providing them lowest price and satisfaction guarantees but he goes further to dazzle customers with unseen surprises. In the early day at Walton’s 5-10, Sam brought his popcorn machine in order to draw more traffic and later he implemented Auction Alleys and Volume Producing Item where customers find mountain of discounted products. One of his favorite VPI (Volume Producing Item) is Moon Pie, a traditional Southern marshmallow snack sold 500,000 boxes in one week.

Rule 9- “Control your expenses better than your competition” Sam has never been ashamed of being frugal business man because while his competitor charges 5 percent of their sales for their offices, he kept it at 2 percent. He operated with fewer people, longer hour walk in and late walk out, lower salary but higher profit sharing plan. He said keeping the oration overhead lean is one of Wal-Mart’s strength. He would fly to New York in Sunday night and go to see vendors at 6 am or scramble 6 top managers in a room to save hotel expenses.

Rule 10- “Swim upstream. Go the other way. Ignore the conventional wisdom” Sam concluded that the phenomenal success of Wal-Mart is the very tendency. Many of his best opportunities were created out of necessities. The things that he and his team were forced to learn and do, because Wal-Mart started out undercapitalized in remote and small communities. Sam started his journey as a humble variety store but he did not go along with system back there franchise would charge commission to refill his shelves so he drove his truck miles to manufacturers who were willing to give him better prices. The result was extraordinary when town folks would flock in his store and later they would spread words of mouth to their relatives in other towns and cities begging for Wal-Mart to open.

They are not the Ten Commandments of Business but as far as we have involved in retail industry, they are utterly precise. We finished our tour of Wal-Mart Museum at the cafeteria, and again, his business philosophy shines when we can buy a gigantic ice cream cone with only 90 cents and a cup of hot chocolate is 99 cents. Our recommended souvenirs would be Sam Walton’s biography –“Sam Walton Made in America”, a revolution story of American retail industry and a traditional moon cake for only 50 cents.

Other than that, we highly recommend two attractions which are the Crystal Bridge Museum and the Museum of Native American History. The Crystal Bridge Museum is sponsored by Alice Walton, daughter of Sam Walton which exhibits a mix collection of American contemporary and classic works with fine galleries and beautiful garden trail. In the other hand, the Museum of Native American History sends us back in time when Native Indians reach their heyday in Southern America.