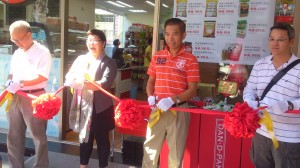 Dan-D-Pak recently opened its first “Dan-D” factory outlet located in Taichung, Taiwan. The store is themed after Dan-D-Pak’s Canadian roots. Customers can purchase over 150 of our most popular SKU’s and also enjoy in-store specialty foods such as fresh sandwiches, popcorn, yogurt ice cream and pasta.

The store celebrated its grand opening with an in-store party that featured a magic show from a famed Japanese magician and free food. The food was specially imported from Canada for the occasion. Our company President and CEO, Dan On was on hand for the ribbon cutting ceremony.

Dan-D-Pak products were well received by the local Taiwanese consumers. Products that drew a lot of attention include quick and roll oats, muesli, inshell almonds, unsalted cashews and walnuts.

You can find Dan-D-Pak cashews, mixed nuts, and pistachios at 21 RT Mart’s and Dan-D Organic Oats at 85 Leezen stores around the island.