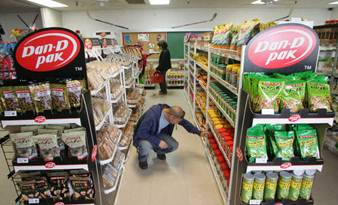 A Canadian-based company has opened a food manufacturing plant in Fresno to be closer to the source of many of its products.

Dan-D-Pak USA, a division of Dan-D Global Foods, has converted a 78,000 square-foot warehouse at Cherry and Jensen avenues into a factory capable of producing about 200 different products, including roasted almonds and trail mix.

“We wanted to be in the heart of the Valley because this is where the pistachios, almonds and raisins are from,” said Lincoln Markwith, general manager for Dan-D-Pak USA. “We can reduce handling and shipping costs and get product that is so much fresher.”

Dan-D Global Foods makes more than 2,000 different items ranging from oatmeal to dried fruit. The brand is well-known in Canada and Asia, but its notoriety is expected to grow in the Valley, thanks to the new Fresno plant.

Markwith said that during the next several months, the company will work to increase its visibility in grocery, discount and convenience stores.

The company recently opened its doors with about 15 workers and anticipates growing to at least 100 by the end of next year.

Linares said she had looked for a job for two months after her previous employer, Z Foods in Madera, shut down this summer.

“It is exciting to be able to join a company that is growing,” Linares said. “And there is lots of opportunity here.”

Markwith said the company plans to buy as much of its raw food ingredients as it can locally.

Recently, the plant was packaging in Fresno raisins for shipment to Japan.

The Company has invested about $1.5 million in equipment and other improvements.

The plant has the ability to oil-and dry-roast nuts and produce flavoured popcorns, candy coatings and trail mixes.

It also operates a factory outlet store that is open to the public on weekdays from 9 a.m. to 4 p.m.