I returned to Japan this year on March 3rd. I came to attend Foodex Japan, the International Food and Beverage Exhibition. When my Japanese agent, Tak San, picked me up, we went straight to set up the booth before we began the true conquest of our trip: visiting large food retailers. Costco was our first stop, followed by Aeon Center, the largest shopping complex in Asia. I was very impressed with how Costco culturally integrated their products. They offer sushi and sashimi at a very competitive price. 18 large piece combos of fresh sushi with ebi (shrimp), uni (sea urchin) and ikura (salmon roe) cost as little as US$18. 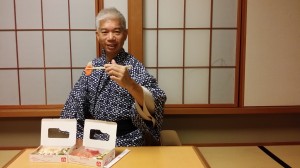 During my entire one-week stay in Tokyo, all I ate was sushi. My mentor, Ben San, took me to Sushi Zanmai in Ginza next to Sony headquarters. I feared it would be expensive, but to my surprise it only cost us US$20. We sat at the sushi bar, and had tons of fun practicing some conversational English and Japanese with the sushi chef. I loved it so much, we returned there every night.

Ben San also brought us to visit the Sensō-ji Temple. As we explored, I discovered that they had been making the same snack that I claimed to have created not long ago. It’s a traditional Japanese bite-size square made from popped rice; the locals call it Agoshi. The recipe is simpler than Dan-D-Pak version because we add almonds and cashews in the mix, but I would love to learn more about what makes these rice squares a staple snack in Japan. This experience inspired a few new ideas on how to rebrand our current rice bites snack.

The Foodex trade show is always fun because I get to see so many familiar faces. Some people exclaim, “Hi Dan, you still look the same!” and I laugh, “Are you trying to kid me? I’m 55 now! My hair is all white.” They praise and respect me for being the “Cashew King”. It has always been a great honour to be known as such. As I walked the show floor, I saluted Justin, the “Mango King” and the owner of well-known Philippine and Cebu brands. I also met some of my long time business friends. Ruben started producing fried banana chips 30 years ago. His sons have become a doctor and a lawyer. They are probably making more money than their dad, but it was their dad’s banana chips business that allowed them to study abroad. My other friends, Burt, the “Banana Chip King” and Bobbie, have also been successful in the banana chips business. Nearly 30 years ago, the couple purchased second-grade banana chips from Ruben and other suppliers, repackaging them to sell at the local train stations. Their hard work eventually created more demand. They began their company, Prime Fruits, with just one fryer. Their business only continued to grow over the past twenty years. Now they claim to be the largest banana chips manufacturer.

Whenever we see each other, we love catching up and hearing each other’s success stories. At the same time we can all relate to the recent challenges that the food industry as a whole has been facing in the past few years. With the significant price increase and shortages of many commodities worldwide, the entrepreneurs like us have to be on top of the latest trends and foresee the possible scenarios.

For Dan-D Foods and every other independently owned Canadian business the year of 2014 is yet another challenging year. No one believed it, but the economy had slowed down tremendously. One of the contributing factors was the Canadian dollar exchange rate, which dropped down by nearly 11%, which inevitably affected the retail industry and, ultimately, the consumer. Ironically, many Canadians still head south of the border to purchase their necessities, including groceries and gas. 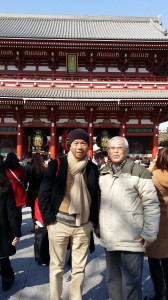 Japan’s economy is not doing very well also. Japan has begun to import cheaper foods from other countries to help their weakening economy and has increased domestic sales tax. Ironically, this is good news for Dan-D Foods. Now that Vietnam and Japan have bilateral trade, import taxes have decreased and we are able to sell quality cashews to Japan.

In the future, I hope to return to Japan with my children and show them the potential Japan has as a retail market. Newer Japanese generations consume more and more Western foods, but are still very health conscious. This culture has even affected the way McDonalds and other large fast food chains serve their products in Japan.

I can foresee future growth in Asia and I see it as a great opportunity for Dan-D Foods to broaden our horizons. Expanding to the new continents and growing our export business, while maintaining a strong position in the North American market, sounds like an ambitious, yet achievable plan.

Dan On
President and CEO

One thought on “Dan’s trip to Japan”