Forgiveness Made Him Millions 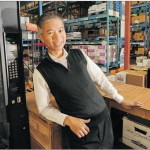 Dan On, founder and president of Dan-D-Foods, in his warehouse. He employs 85 people in Richmond and 1,500 worldwide.

Dan On could have laughed and torn up the letter from the Vietnamese  government inviting him to build a plant in the country he fled 11 years  before.

No one, not even the Vietnamese, would have blamed the Dan-D Foods president  if he had.

But On had long since forgiven the communist government for the persecution  that forced him to flee by boat from Ho Chi Minh City in 1979. That forgiveness  gave On enough clarity of mind to recognize a business opportunity.

The developing nation’s wage rates would be low. The government was willing  to waive taxes for five years. And Vietnam is one of the globe’s largest  producers of cashews – a key product for Richmond-based Dan-D.

On decided to give Vietnam another chance. He started with a small investment  in 1993 and in 1999 launched a processing plant in Binh Duong province in the  south.

The plant flourished. It grew. On, 52, now has two factories employing about  500 people.

One of the dumbest things Vietnam ever did was to force On to flee the  country in 1979. One of the smartest things it did was to invite the food  manufacturer back.

“I’m pretty much respected in the business community in my own province in  Vietnam,” On says.

“We also received a prime minister’s award for being the top growth company  in the food industry.”

One of the smartest things Canada has done was to accept On as a refugee in  1979. At 18, he was adopted by George and Irene Kavanagh of Port Coquitlam after  spending months in Malaysian refugee camps.

The idea for Dan-D, and the experience he needed to make it work, came from  working in Kavanagh Foods, George’s granola factory. In 1988, On launched his  own grocery store in east Vancouver and a year later he founded Dan-D Foods with  $80,000 borrowed from the bank.

Starting a company was a natural move for On. He had discovered a flair for  sales as a 15-year-old vending sandals on the streets of what is now Ho Chi Minh  City.

“I was very much the entrepreneur,” he says. “It was in my blood to be a  businessman.”

Today, Dan-D has grown to about 1,500 employees, including 85 at its Richmond  head office, and 2,000 individual products distributed as far afield as Europe  and Australia.

George Kavanagh, the Canadian father who gave him early exposure to the food  business, works for On as brand ambassador.

In another year or so, a third-generation family member will join the company  when Victoria, On’s daughter, becomes chair of the Canadian operations.

Victoria, 23, is about to graduate with a business degree from Simon Fraser  University and will soon leave for Taiwan to spend a year learning Mandarin. Her  21-year-old brother, Dan Jr., will eventually head to Vietnam to learn the  operation there.

“An organization can’t have one hero,” On says. “You’ve got to have a lot of  heroes.”

On, however, is by no means easing into post-heroic retirement. Much remains  for the Dan-D president to do if he is to achieve his ambitions in North America  and Asia.

Growing affluence in Asia has been fuelling the world’s hunger for Dan-D’s  packaged fruit and nuts, cereals and baking products, grains and spices.

How sharp is that hunger? The world eats 5,000 tonnes of Dan-D cashews a  year, On says.

Last year, the company opened a production plant in Fresno, in the belly of  California’s fruit-and-nutrich Central Valley. From there, it plans to expand  its presence in an American market where it already has client chains such as  Trader Joe’s and Walgreens.

Big U.S. chains typically ask Dan-D to package foods under their own private  labels once they see strong demand for Dan-D product. So On says Dan-D’s U.S.  future will be lined with indie grocery stores, where it can nurture its own  brand.

Dan-D also has offices in Toronto, Hong Kong, Thailand, Taiwan – and China.  Some Canadian business experts have been quick to rave about the potential in  China but On has patiently waited for incomes to mature to the point his  products are affordable. In five years, On expects Asia’s share of Dan-D’s  revenue to soar to 30 per cent from its current seven.

“Consumers trust products from outside of China,” he says. “We’re in the  midst of changing our label and putting a Canadian flag on the package.”

And what about the guy who’s driving these changes? Is Dan On the same person  he was 34 years ago when his Vietnamese parents scraped together 12 ounces of  gold to put him on a boat to a better life?

On the surface, he’s vastly different. He bikes, golfs, ballroom dances,  practises yoga, cooks gourmet meals and supports charities in Canada and Vietnam – stuff the teen fighting to stay alive on a boat full of refugees couldn’t have  imagined doing.

On remains a risk-taker. But with so many people depending on him he’s more  focused and thoughtful about the chances he takes.

“When I was a young guy, I was in hurry about everything,” he says. “I’ve  learned to slow down.

“When you slowly throw a stone in water, you get a better picture of the  expanding rings.”

One thought on “Forgiveness Made Him Millions”