Lending a Helping Hand in Vietnam 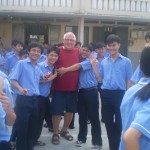 Giving back to local and global communities has always been important to our President & CEO Dan On. When Dan was in Vietnam last winter, he visited Thuan An Centre, a school for hearing impaired children. Dan-D Foods has been donating to the children of Thuan An Centre for several years and Dan has visited them every year since 1992. The school has a long history in Binh Duong Province since its establishment in 1886 by French priest Father Luc.

During Dan’s December visit, he spent time at Lai Thieu Church with the 18 nuns who provide daily care to the hundreds of children at Thuan An Centre. At the time, the kids were on holiday for Lunar New Year and he had a unique opportunity to catch up with the nuns who he has gotten to know well over the years. Many of them were educated in parts of Europe such as France and Italy and are between the ages of 50 and 80. The nuns take their care-giving role to the children seriously and are very disciplined. Working in a rural village in Vietnam, they rarely see foreigners and are excited to see Dan every time.

Known for his culinary skills among other talents, Dan hosted a party for the nuns. He cooked dinner which included spaghetti, filet mignon, minced meat pie, chocolate bread pudding and apple turnovers. Dan fondly recalls how the nuns forgot to say grace before eating: “the nuns, including reverend Mother Maria Huynh Thi Quoi were all giddy like kids as I served them the dishes.”

Some of the staff from headquarters in Richmond, B.C. also visited Thuan An Centre and gave the kids gifts.

Since the establishment of the centre six thousand hearing impaired children have been raised and educated. The goal is to treat all the disabled children in Vietnam at an early age.

For anyone who is interested in visiting Thuan An Centre or Lai Thieu Church, please contact human resources at hr@dandpak.com.