Live Report From Beijing, By Dan On

Today I embarked on a business trip to Beijing, China. Mrs. Wang ( Dan-D Foods China Office Manager ) and I arrived in Beijing last night at 5 pm.

This week is important in the capital city of China, 20,000 members of the National Congress from around the country poured into Beijing to attend a week long meeting that will see the election of the new leadership which will govern China for the next decade.

The city, especially Tiananmen Square is on high security alert because of the meeting. The entire square is lit up by bright red lanterns; it looks like festival time in the city.

There are very few tourists around, probably because of the high security. During this time no cars from other provinces are allowed to enter into the city capital unless they have a special permit. The permit is almost impossible to get, so it was extremely lucky for us to be able to tour the city during this time. There are security checkpoints on every street corner. The Government pays special attention to people that may try to attract international media attention such as separatists and protestors.

One of our business associates with a car was nice enough to give us a grand tour of Tiananmen Square in his white BMW. The ride was very comfortable.

We drove by Yong Ho Gung, the old business office of the former emperor Yong Zheng who ruled China for 13 years. The building was absolutely stunning and had a very distinctive unique look. I wonder how beautiful the building would have looked back in its hey day. 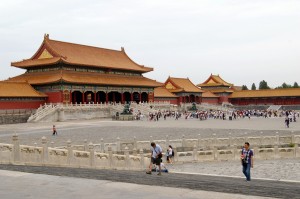 We went by the back end of the Summer Palace to the old red wall. You can see many ancient historical attractions in this area. The beautiful willow trees we drove by made me feel like I was back in the Ming and Qing dynasty. I love history; it fascinates me to learn the deep culture of old China.

Beijing has transformed itself from an ancient city of the past to an incredible modern business centre. There are many modern skyscrapers along with the state-of-the-art buildings from the 2008 Olympics such as the Olympic village; the birds nest stadium and the gorgeous Water Cube.

The population of Beijing is now over 35 million people.That is more than the entire population of Canada, California or Taiwan. I remember when I first came to Beijing in the 80’s, there was less than ten million. Beijing certainly has grown.

We stayed at Novotel Hotel near by Wang Fu Jing, the area is a great place to visit. There is night market and nice places to shop. What I was really excited about was the feast we were going to have later on that night. B.B.Q. Duck in Beijing is the absolute best in the world.

On Sunday, our chestnut supplier from Tang Shan, Hebei province invited us to come visit them for a factory tour. They didn’t have a permit to enter the city and pick us up, so we had a taxi drive us from Novotel Hotel to the city border. Taxis refuse to exit the city at the time because they would not be allowed back in if they leave. 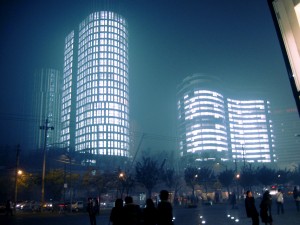 When we got off the taxi, we walked across the border, where Ms. Ng had been waiting for over an hour in a black BMW 750 IL.

We headed to the freeway and left the capital with the 35 million Beijing residents behind us. After an hour and a half ride we entered old rural China. The sights and smells of the underdeveloped village buildings gave me nostalgia of the 80’s.

When we arrived, Mr. Wang, the owner of the chestnut factory met us at the local hotel. It is an old custom in China for the gracious host to arrange travel and meal plans for their guests. We were treated to a lavishly expensive lunch and drank local beer before we headed to the Chestnut factory.

I entered the factory and was immediately amazed at how the production line was setup. I haven’t seen a product which requires so much manual labour in my life. The production line consists of 450 workers. Roughly 100 people are used to crack the chestnut shells. After, ten men dressed in military style uniforms roast the chestnuts in an open charcoal fire. After roasting, two hundred people begin to shell the chestnuts before they are washed and prepped for packing. Fifty people work to bag and vacuum seal the product, while another twenty people work on steaming and pasteurizing the product. The factory also has a R&D laboratory that employs five people.

In the past, Mr. Wang tried to find a machine to automate the chestnut shelling process, however currently there are no machines that can do the job better and more efficiently than human hands.

Dan-D Foods sold over 15 containers of chestnuts in 2012. I am impressed and really think our sales team is doing a great job.

Chestnuts are GMO-free and organic with no pesticides or preservatives. The product is registered and certified with the California Certified Organic Farmers (CCOF) and has passed their audit with a remarkable grade. I highly recommend all our valued customers try and sell this product in their stores, It’s a sure hit. We would be extremely happy to help promote store sales with in-store demos. Please contact our sales staff for more information.

It was an amazing trip; I learned a lot and had so much fun. I hope to do it again sometime in the near future.

One thought on “Live Report From Beijing, By Dan On”